“I photograph by hand; this is not a time lapse. … It’s my eye seeing very specific moments.  I like to describe myself as a collector.”  Steven Wilkes

“Once Wilkes has all the images, he picks the best moments of the day and the night and creates what he calls a master plate. Those images then get seamlessly blended into one single photograph, where time is on a diagonal vector, with sunrise beginning in the bottom right-hand corner. That process of creating a single image can take about four months — though it’s photographed in a single day.
of magical moments.”‘ 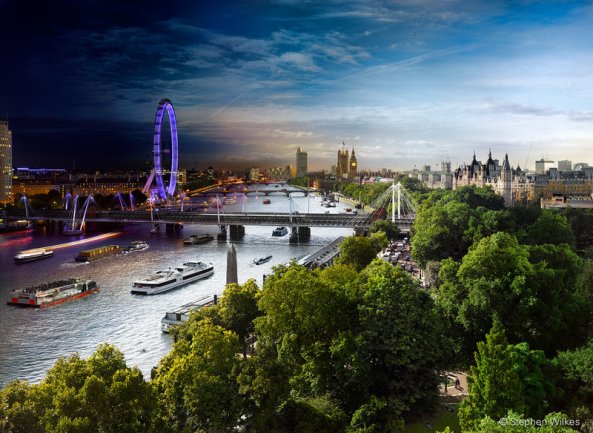 View from The Savoy, London, Day to Night, 2013.
Courtesy of Stephen Wilkes

In this last photo of Serengeti National Park in Tanzania – “For 26 hours, Wilkes shot 2,200 photos without moving the camera and while suspended in the air in a tent-like structure with a little window, so that animals wouldn’t see or hear him as he photographed them coming to a watering hole from sunrise to deep into the night.”

Read the interview and article by Nina Gregory here ‘When People Can See Time’: Photographer Captures Day, Night In One Image

Take a look at Stephen Wilkes Gallery Day to Night

5 comments on “When people can see TIME”

And You Thought ONLY Virus Were Contagious

They call us “home” our microbiome. Our body spews  a cloud no one can see Bacteria, viruses, fungi intermingling you and me Releasing microbes in the air from head to toe where ever we go Because they’re here to stay Don’t waste your money on bug spray “Each of us carries around millions of microorganisms – including […]