I’m baaaaaaack . . . sorta . . . missed all my art classes, missed church . . . cancelled The HeART of Spirituality workshop cuz I’ve been feeling puny.  (And when I am feeling puny I eat,  watch the cooking channel, download recipes and read all I can about what not to eat in the hopes that I will follow that advice.)

The only constructive thing I’ve done is work on the NEW BLOG Catnip with my good friend and colleague Peggy Arndt.

(Peggy is a retired psychotherapist too AND an artist and author.  I’ve never caught Peggy feeling puny and eating since she’s within a pound or two of the same weight she was when we were in high school together.  If I didn’t like her so much I’d hate her.)

Between the two of us we have amassed decades of information on neuroscience and behavior and relationships . . .  and eating . . . and addictions.  We’re going to share all that on a new blog called CATNIP (but I digress . . .)

While I was researching for CATNIP this article caught my eye . . .   here are some excerpts: 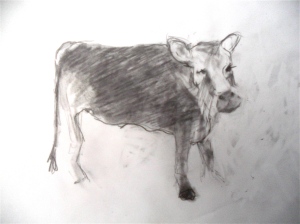 The Case Against Dairy Crack

“The average American eats more than 33 pounds of cheese a year.”  (Thirty-three pounds is about the amount of weight I’d like to lose.  I need to stop eating my American share of cheese.)

“This is according to Neal Barnard, physician and president of the Physicians Committee for Responsible Medicine. And that’s a problem, he says, because it’s helping to make us overweight and sick.”

“Loaded with calories, high in sodium, packing more cholesterol than steak, and sprinkled with hormones — if cheese were any worse, it would be Vaseline …”

Some foods are fattening. Others are addictive. Cheese is both — fattening and addictive.”

“Barnard explains that dairy protein — specifically a protein called casein — has opiate molecules built in. When babies nurse, he notes, they’re getting dosed with a mild drug: “Milk contains opiates that reward the baby for nursing.”‘

“It’s no different with the cow’s milk — or other mammalian milk — from which cheese is made. In fact, Barnard says, the process of cheese-making concentrates the casein” 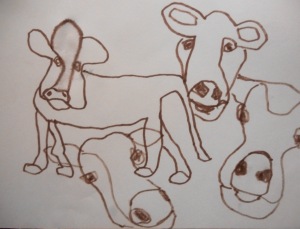 “Dairy proteins appear to trigger inflammation, apparently by triggering the release of antibodies, which leads to the constriction of the tiny muscles in the airways. By avoiding dairy proteins, the trigger for the [asthma] attacks is gone.”

“. . .  Barnard notes that vitamin D may play an important role in protecting us against some types of cancers. Citing prostate-cancer data, he suggests that because dairy products are high in calcium and calcium intake can slow down activation of vitamin D, cancer risks may increase with cheese-eating.”

“The National Dairy Council (or cows who would rather be milked than molded into meat patties) does not endorse Barnard’s descriptions of cheese . . .  and points to research from Harvard School of Public Health that shows no association between cheese and long-term weight gain.”

“However, if one’s goal is to lose weight, there is something to be said for not teasing yourself with occasional doses of the very food that caused the problem in the first place. (I might add sugar and refined carbs to the list . . . might?) Better to end that bad love affair. If a person is concerned about asthma, migraine, rheumatoid arthritis, or other sensitivities, one soon loses all desire for the food product that caused the problem.” (So far THAT argument hasn’t worked with me.)

(Maybe every time I feel puny  I should picture myself eating 33 pounds of VASELINE . . . )

*Barbara J. King is an anthropology professor emerita at the College of William and Mary.  Barbara’s most recent book on animals is titled How Animals Grieve, and her forthcoming book, Personalities on the Plate: The Lives and Minds of Animals We Eat,

The Cheese Trap, How Breaking a Surprising Addiction Will Help You Lose Weight, Gain Energy, and Get Healthy by Neal D., M.d. Barnard, Dreena Burton and Marilu Henner

20 comments on “Am I Addicted to Dairy Crack? (parenthetically speaking. . . )”