Wondering if your pet rat is feeling happy? You should check its ears, researchers say.

A team of scientists in Switzerland found that a rat’s ears are more pinkish and are positioned at a more relaxed angle when it is experiencing positive emotions. The researchers recently published their findings in the journal PLOS ONE.

Scientists have not yet pinpointed what a rat is feeling when it is experiencing a “positive” emotion. As Melotti explains, they are currently at the point where they can distinguish “positive” emotions from “negative” – but not finer emotional graduations between happiness, joy and optimism, for example. 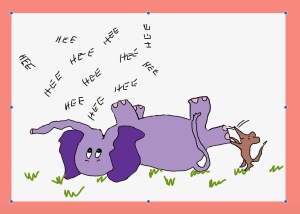 It’s interesting that rats show emotions on their faces because they are not particularly visual creatures, Melotti says. They’re nocturnal and rely primarily on their sense of smell and touch.

The team says their findings could indicate that rats “may at least partly sense … the facial expressions of their partner, along with other body postures, to gather information on the likelihood the partner will initiate play, and how intense that play is likely to be.”

What we are up to NOW

Here’s the back story . . . Our eyes are crossed trying to figure out where we’ve put our free stuff, our book stuff, our Zazzle stuff.  We toggle back and forth between CURIOUStotheMAX, MAXyourMIND and our KNEWSLetter.  And during Covid, because we’ve both been isolating, this involves MILLIONS of e-mails between the two of […]