I am sustained by my Baha’i belief that pain, suffering – any type of crisis – is an opportunity for learning, changing and growing.  My professionally and personal experience backs my belief as I know, without a doubt, that pleasure, ease and happiness do not promote growth.

Don’t get me wrong, I certainly don’t seek out pain and suffering but when it happens to me or in the world I do look for the good that can evolve. 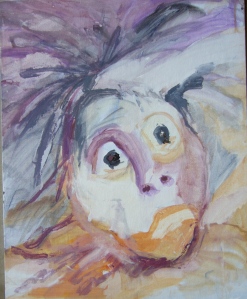 Pain, Acrylic on Canvas, by moi

When I read this interview with the Liberian President Ellen Johnson-Sirleaf Ebola Revitalized her Downtrodden Country it was an example of what I believe is possible in the world.

Here’s an excerpt – The entire interview is worth a quick read:

“Do you think the image of Liberia has changed through this [Ebola crisis]?

“Yes, I think it has. We were the poster child of everything that could go wrong: disaster, death, destruction all over the place. We too, as a result of Ebola, had a re-energizing of ourselves. We saw a new opportunity to turn this crisis into something that will be good for the country. And it’s not just the leadership, It’s also the people in the communities. They were the victims but they became the victors because they were the ones who took responsibility. They all had a role to play. And because of that, we see this as a new resurgence. Our success, we think, has been heralded. If you look at the predictions that we faced in October, I mean, by the end of January there will be 1.4 million people dead. That was a wake-up call for us, a call to action. Our people rose to that.”