“Be not content in showing friendship in words alone. Let your heart burn with loving-kindness for all who cross your path.”

Loving-kindness Treat ME, by Peggy

A Nosh of Baha’i

The Baha’i Faith is the world’s second-most widespread religion after Christianity, spanning the globe and working to unite it. Baha’is have no clergy or churches, gathering together in democratically-led communities and welcoming everyone.

The millions of Baha’is in the world come from every ethnicity, nationality, tribe, age, racial group, religious background and economic and social class.

Bahá’ís believe the crucial need facing humanity is to find a unifying vision of the future of society and of the nature and purpose of life.

During the month of November, Baha’i Blogging is hosting a post-a-day-or-so something related to or inspired by Faith.  Because so many of you follow both this blog and CATNIPblog Peggy & I will post our “dailies” here and Sunday “retrospectives” on CATNIPblog.com

Surprising: An Australian Magpie and a Jack Russel Terrier puppy playing together.  Astonishing: People still hang laundry outside to dry.

In the early 1970’s I had a German Short-Haired Pointer.  She came to us when she was 3 years old.  Her name was “Tres”.  She was beautiful.  One hundred percent dark “liver colored except for the tip of her tail and  3 (tres) large, solid white spots down her back .    Field trained, she knew how to sit, stay, fetch, heel, retrieve and a million other commands I don’t even know the name of.  As hunting dogs, German Short-Haired Pointers, have incredible stamina and energy.

So every day I took her to run in the park where there was a small lake, home to many ducks and migrating birds.    When Trecy spotted a duck she would point – front leg up, white-tipped tail straight back, waiting for a command.   She soon figured out that the only commands I knew had nothing to do with ducks and she’d  jump into the water.

Except she didn’t know how to swim! While her hind legs dangled straight down in the water her front legs beat furiously, sending up a huge spray, propelling her through the water.  People would come from all over the park to see what the commotion was.  Thank goodness she couldn’t swim properly so the ducks could always get away.

Trecy was the sweetest, most gentle creature and everyone loved her.  When I received this e-mail from Rosemary Lee tears came to my eyes.  Look at the pictures of the Orangutan and the German Short Haired Pointer and you’ll see why.

“After losing his parents, this 3-year-old orangutan was so depressed he wouldn’t eat and didn’t respond to any medical treatments. The veterinarians thought he would surely die from sadness.”

“The zoo keepers found an old sick dog on the grounds in the park at the zoo where the orangutan lived and took the dog to the animal treatment center. The dog arrived at the same time the orangutan was there being treated.”

“The 2 lost souls met and have been inseparable ever since. The orangutan found a new reason to live and each always tries his best to be a good companion to his new-found friend.” 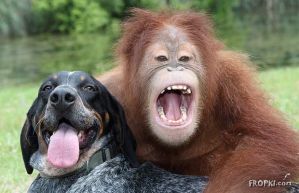 “They are together 24 hours a day in all their activities.”

“They live in Northern California where swimming is their favorite pastime, although Roscoe (the orangutan) is a little afraid of the water and needs his friend’s help to swim.” 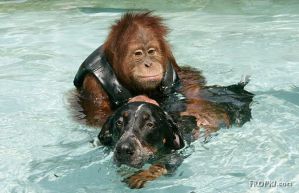 “They have found more than a friendly shoulder to lean on.” 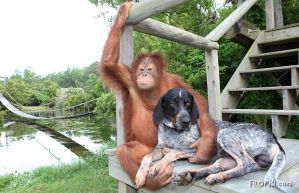 “I don’t know… some say life is too short, others say it is too long, but I know that nothing that we do makes sense if we don’t touch the hearts of others… while it lasts!

May you always have
Love to Share, Health to Spare, and Friends who Care.” 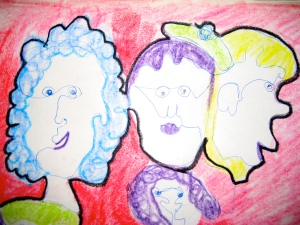 A wonderfully irreverent friend sent this to me.  I have edited NOTHING out because Linda wants: None of that Sissy Shit!

P.S.  The drawings are  using one continuous line without picking up the crayon, by moi.

“Are you tired of those sissy ‘friendship’ poems that always sound good, but never actually come close to reality?
Well, here is a series of promises that actually speak of true friendship.
You will see no cute little smiley faces on this ~ Just the stone cold truth of our great friendship.”

Friendship is like peeing your pants, everyone can see it, but only you can feel the true warmth.

Send this to 10 of your closest friends (including the one who sent it to you).

Then get depressed because you can only think of 4″

Sharon and I go back to grade school, 4th grade Madison Elementary School in Phoenix, Arizona.  We both played violin (I played at playing the violin).

At Camelback High School we shared most of the same classes.  We both were on the college track.

Sharon was REALLY smart.  I have proof — she was class Valedictorian.  While I was running for school offices, Sharon stayed behind the scenes: Editor-in-chief of the school paper, a creative writer, Junior Statesman, Honors Societies, racking up A’s in all her classes.

After graduation from High School our paths never crossed until our 40th High School reunion.

And we discovered  we both went to college in Northern California (where she was on full scholarship). We both ended up in the helping professions. Sharon’s a Licensed Clinical Social Worker.  We both ended up with chronic medical conditions.

We discovered we had a lot in common – nether of us was NORMAL!

I have proof:  On this page is a representative sample of some of the things SHE has picked out to send me:

Friends are like bras, close to your heart and all about support (embroidered on pillow)

Now here’s the rub.  Everyone has always known I’m not normal BUT SHARON hid it! – just like her duck!

Well, my dear friend, now that you are almost as old as I am,

I met some remarkable people working as a therapist in a hospital psychiatric ward.  One of the most memorable was a Vietnam veteran who flew into rages.  He’d lost his lower left leg in battle. But the war or being severely injured were not what made him rageful. He had always raged, even as a […]