“The earth is but one country and mankind its citizens”

This Â infrared mosaic image, taken by the Hubble telescope, represents the "sharpest survey of the Galactic Center to date," NASA

Visit the NASA site — where you can see it in its full 3,000-pixel glory. Here’s how NASA describes what you’re seeing:

“Seeing Red
This NASA Hubble Space Telescope infrared mosaic image represents the sharpest survey of the Galactic Center to date. It reveals a new population of massive stars and new details in complex structures in the hot ionized gas swirling around the central 300 x 115 light-years. This sweeping infrared panorama offers a nearby laboratory for how massive stars form and influence their environment in the often violent nuclear regions of other galaxies. The infrared mosaic was taken with Hubble’s Near Infrared Camera and Multi-Object Spectrometer (NICMOS). The Galactic core is obscured in visible light by dust clouds, which infrared light can penetrate.

The new NICMOS data show the glow from ionized hydrogen gas as well as a multitude of stars. NICMOS shows a large number of these massive stars distributed throughout the region. A new finding is that astronomers now see that the massive stars are not confined to one of the three known clusters of massive stars in the Galactic Center, known as the Central cluster, the Arches cluster, and the Quintuplet cluster. These three clusters are easily seen as tight concentrations of bright, massive stars in the NICMOS image. The distributed stars may have formed in isolation, or they may have originated in clusters that have been disrupted by strong gravitational tidal forces.

The winds and radiation from these stars form the complex structures seen in the core and in some cases they may be triggering new generations of stars. At upper left, large arcs of ionized gas are resolved into arrays of intriguingly organized linear filaments indicating a critical role of the influence of locally strong magnetic fields.

The lower left region shows pillars of gas sculpted by winds from hot massive stars in the Quintuplet cluster. At the center of the image, ionized gas surrounding the supermassive black hole at the center of the galaxy is confined to a bright spiral embedded within a circum-nuclear dusty inner-tube-shaped torus.”

The false-color image was taken through a filter that reveals the glow of hot hydrogen in space. 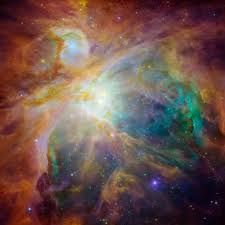 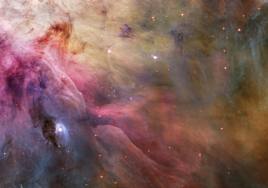 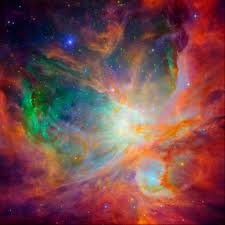 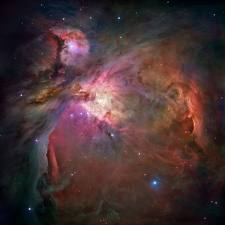 Panoramic Hubble mosaic zooms in on Maelstrom of star birth
This color panorama of the center the Orion nebula is one of the largest pictures ever assembled from individual images taken with NASA’s Hubble Space Telescope. Located 1,500 light-years away, along our spiral arm of the Milky Way, the Orion nebula is located in the middle of the sword region of the constellation Orion the Hunter, which dominates the early winter evening sky, at northern latitudes. The stars have formed from collapsing clouds of interstellar gas within the last million years. The most massive clouds have formed the brightest stars near the center and these are so hot that they illuminate the gas left behind after the period of star formation was complete. The more numerous faint stars are still in the process of collapsing under their own gravity, but have become hot enough in their centers to be self luminous bodies.

The crisp image reveals a tapestry of star formation, from the dense pillars of gas and dust that may be the homes of fledgling stars to the hot, young, massive stars that have emerged from their gas-and-dust cocoons and are shaping the nebula with their powerful ultraviolet light.

The new picture reveals large-scale structures never seen before, according to C. Robert O’Dell of Vanderbilt University in Nashville, USA “Only with the Hubble Space Telescope can we begin to understand them,” O’Dell said.

The Orion Nebula is a perfect laboratory to study how stars are born because it is 1,500 light-years away, a relatively short distance within our 100,000 light-year wide galaxy. Astronomers have a clear view into this crowded stellar maternity ward because massive stars in the centre of the nebula have blown out most of the dust and gas in which they formed, carving a cavity in the dark cloud.

“In this bowl of stars we see the entire star formation history of Orion printed into the features of the nebula: arcs, blobs, pillars, and rings of dust that resemble cigar smoke,” Robberto said. “Each one tells a story of stellar winds from young stars that impact the stellar environment and the material ejected from other stars. This is a typical star-forming environment. Our Sun was probably born 4.5 billion years ago in a cloud like this one.”

Personal note from Judy: I’ve decided to completely delete my facebook accounts. The lack of social responsibility and focus on greed is something I no longer wish to support in any way. If you want to continue to see what I’m “up to” please subscribe to the blogs Peggy and I share: MAXyourMIND http://PeggyArndt.com&#8211; and […]