During Covid Isolation Bird watching has become one of the few activities that are relatively safe wether done outside or looking out your windows.  We are discovering that “bird-brains” are complex and not stupid!

Play behaviour may be an important driver in the evolution of large brains in a number of species, including humans.

Have you ever seen magpies play-fighting with one another, or rolling around in high spirits? Or an apostlebird running at full speed with a stick in its beak, chased by a troop of other apostlebirds? Well, such play behaviour may be associated with a larger brain and a longer life.

For the past 50 years, international animal cognition research has often related the use of tools such as rocks and sticks to cognitive abilities in animals. But my research on Australian native birds, published in Scientific Reports, casts doubt on long-held assumptions about the links between large brains and tool use.

No significant association between tool use and brain mass.

However, very clear differences in relative brain mass emerged when birds showing play behaviour were compared to those that didn’t play. In particular, birds that played with others (known as social play) had the largest brain mass, relative to body size, and even the longest lifespans.”

Tool use in birds

Tool use has been studied in a wider range of species than play behaviour. Some internationally famous Australian examples include:

According to a classic theory known as the “technical intelligence hypothesis”, humans and other animals developed large brains because circumstances forced them into ever more sophisticated tool use.

What is bird play? 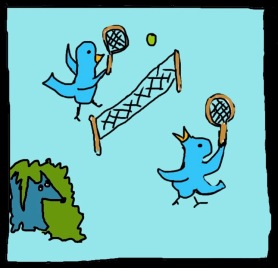 Solo play: this may involve a single bird running, skipping, jumping, ducking, rolling, hanging, swinging, dancing, sliding and snow-romping. Solo play is the most widespread form of play, common among  parrots, magpies, and some pigeon species.

Object play: this involves objects of any kind, including sticks, stones and small household items. Object players might carry a stick or stone or even just a leaf around, drop it, then pick it up again and run with it.

Object players are not as numerous as solo players but still widespread across species. Click here to read a lovely description of a kookaburra absorbed in playing with a stone.

Social play: involves two or more individuals. Social play is so far the rarest category. It might involve one bird holding an object in its beak and the others chasing it. Published cases are largely limited to parrots and corvids, and are known in magpies and ravens.

White-winged choughs are known to play a game in which two youngsters simultaneously grab a small stick or a bunch of grass, then each tries to wrest it from the other.

It turns out these categories are meaningful when used to analyse a potential link to brain mass. Information on brain weight/mass in Australian birds has been available only since an important study in 2014. It identified brain volumes and body sizes of all Australian bird species, enabling researchers to link these biological data to behavioural data.

My study involved 77 native Australian bird species for which full data sets were available. The results were more than surprising. In the samples used, tool use seems to confer no advantage whatsoever in terms of brain size or life expectancy: no matter whether a species showed tool using or not, relative brain masses were not different. However the results showed, rather dramatically, that brain size and forms of play are associated.

These results are by no means confined to parrots, but are found in songbirds and other orders. Whether this holds for birds globally is not yet known. However, since parrots and songbirds first evolved in Australia, then spread to the rest of the world, the results may indeed hold for birds outside Australia. More research will be needed.

Which came first the brain or the play?

Play resulting in large brains or large brains triggering play behaviour – is not known. But whichever way one looks at it, playing socially or even just playing at all, is related to a bigger brain and a long life.

So what does all this mean for human brain evolution? It may be a long shot, but the stages of development in humans and birds seem to have some similarities and this may be significant.

Offspring in humans, as in great apes and other primates, also develop slowly, have protracted childhoods and play extensively as do a surprising number of Australian native birds. It may mean playing together offers more than just passing the time. It could be an evolutionary driver for intelligence, and even for a long life.

Personal note from Judy: I’ve decided to completely delete my facebook accounts. The lack of social responsibility and focus on greed is something I no longer wish to support in any way. If you want to continue to see what I’m “up to” please subscribe to the blogs Peggy and I share: MAXyourMIND http://PeggyArndt.com&#8211; and […]