Am I lucky, or what!  Not only do I live in a house with running water, I live close to the  ocean (Pacific to be exact).  There’s evidence that some people are especially sensitive to the effects of water and even feel their mood lifted by fresh, humid air.

Roughly one-third of the population seems to be particularly sensitive to negative-ion depletion . . .  can lead to feeling “down” at best and depressed at worst.

I am one of the 30%.  Even a humid breeze lifts my spirits.  I remember getting off a plane in Hawaii, breathing in the fresh, humid breeze and instantly feeling my mood elevate.  Perhaps it’s not only the incredible beauty of islands that attracts but the humidity that lifts the spirits?

“Columbia University studies of people with winter and chronic depression show that negative ion generators relieve depression as much as antidepressants.”

The atmosphere we breathe, normally is full of positive and negative ions. However, air conditioning, lack of ventilation, and long dry spells remove negative ions from the air.  The proportion of negative ions is highest around moving water – storms, oceans, rivers, waterfalls.  No wonder I feel so energized at the beach.

The best ratios of negative to positive ions are associated with waterfalls and the time before, during, and after storms. The worst are found in windowless rooms and closed, moving vehicles. Air purifiers typically work by emitting negative ions, which purify room air by attaching to impurities and sinking them.

Marian Diamond, professor of neuroanatomy, University of California, Berkeley, found that levels of negative ions are inversely related to levels of serotonin in the brain. Negative ions suppress serotonin levels in much the same way that natural sunlight suppresses melatonin.

Deplete the air of negative ions and you experience an increase in serotonin and its attendant drowsiness and relaxation—not what you want when mental agility is demanded. 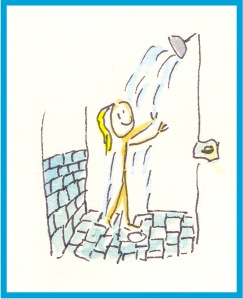 They Teach It at Stanford A lecture at Stanford University by the head of psychiatry, was on the mind-body connection – the relationship between stress and disease. The speaker said, among other things, that one of the best things that a man could do for his health is to be married to a woman. Whereas […]