The meaning of life is to give your gift away.”

Seems as if December brings many beginnings and endings.  Here’s a lovely article I received from Cathy, a wonderful, talented writer. It made me reflect: The passing of parents, particularly the same-sex parent, often leaves us asking questions about our own lives; I suspect questions may be the most important legacy we receive.
Here’s Cathy’s questions.  Which do you share? 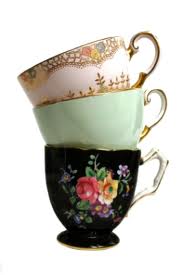 “Thirty-seven years ago today (Dec 19), my mother passed away. The phone rang at 7 a.m. I answered, and the doctor asked to speak to my dad. He sat on the edge of my bed and took the call. Then he put his head in his hands and cried hysterically. I don’t really know what happened after that. I do remember that I made the calls to my brother and sister, aunts and uncles, because my father could not.
We went to the hospital; the doctor wrote me a prescription for Valium. I never took it. We went to breakfast and had bacon, eggs and toast. I don’t remember tasting anything. We went to the funeral parlor. I picked out the coffin because my father could not. It was slate blue metallic with a blue satin lining.
After that, there were the usual preparations and condolences and services. Those I barely remember.
I wonder what she would think of me after all these years. I wonder what she DOES think of me. She visits me often. She would probably to this day tell me that I can be anything I want to be. Is that still true? Was it ever? What can I accomplish in the remainder of my life? Have I squandered it all? And, in truth, what DO I want now? That’s the difficult part.
All I know is that today I will acknowledge my mother. I will unwrap her fragile tea-cup salvaged from my dad’s apartment this year and put it in a place of honor. Just so she knows she is not forgotten.”

“I too have been touched by random acts of kindness. I will never forget a lovely couple who picked me up on the freeway and saw me home when I was a starving student with a very unreliable car.

More recently I think of the kind salesman we met in Italy, who drew us a little map in Florence when we couldn’t find our way, and shared with us the best sights to see and places to eat, all in flawless English!

I had an opportunity to pay it forward recently, when a little Phillipino lady got lost in our neighborhood. She could not remember her telephone number or address and she had nothing in her purse to help me figure out how to get her home. I brought her into my kitchen for a cup of tea, and we contacted the police department, who was able to check the database and find out she lived a few blocks away so we could get her home. She gave me a big hug and said “you are so kind”. I hope she won’t wander away again.” 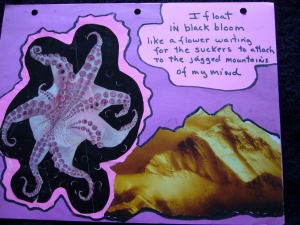 for the suckers to attach

to the jagged mountains

To be honest I had NO idea this is what I felt when I did this journal page a few months back.  It sounds pretty melodramatic as I look at it now.

8 arms:  It struck me though that there have been 8 major decisions in my life which set or reset my life’s course.

The floating:  I was looking for a place to anchor myself.  As I understand it now, I was very tired at the time.  I was pulled in many directions – 8?   And I needed help from a friend to sort out my priorities.

Mountains of my mind:  To be able to look at things logically and rationally so I didn’t feel so overwhelmed.

I looked up octopus to see what  on earth drew me to that image.