“You can become blind by seeing each day as a similar one.

Each day is a different one, and each day brings a miracle of its own.”
— Paulo Coelho

This morning  I woke thinking that today was yesterday.  This afternoon I thought that today is tomorrow. Holy Toledo! (wonder where that expression comes from?) Time is mushed in my mind.

The UCLA findings are the first to suggest that networks of brain cells in a petri dish can learn to generate simple timed intervals. 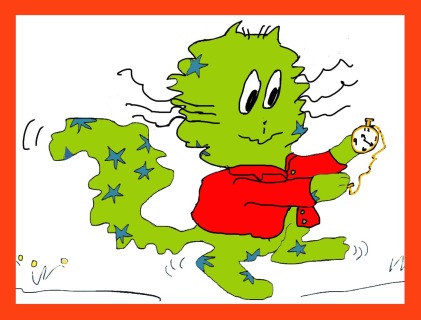 The ability to tell time is fundamental to how humans interact with each other and the world. Timing plays an important role, for example, in our ability to recognize speech patterns and to create music.

In a three-year study, UCLA scientists attempted to unravel the mystery by testing whether networks of brain cells kept alive in culture could be “trained” to keep time. The team stimulated the cells with simple patterns — two stimuli separated by different intervals lasting from a twentieth of a second up to half a second.

By measuring activity in the brain as reflected by blood flow, Duke researchers have demonstrated for the first time that the brain’s motor control center also keeps track of time. Their experiments show that in both animals and people, the striatum, a portion of the brain once thought only to control movement, keeps track of timing short intervals, from seconds to minutes.

“In addition to providing the first map of a neural circuit for an internal clock, the results have implications for Parkinson’s disease patients, because the timing mechanism is located within the basal ganglia, which is damaged in people with Parkinson’s disease. The findings also may help define the role of timing in learning and memory, said Dr. Warren Meck, associate professor of experimental psychology at Duke University.”

“We believe timing is the foundation for learning and memory,” Meck said in an interview. He suggests that defective timing mechanisms may underlie some learning disabilities and may contribute to dyslexia. Before these experiments, how the brain keeps track of time intervals in the seconds to minutes range was unknown.”